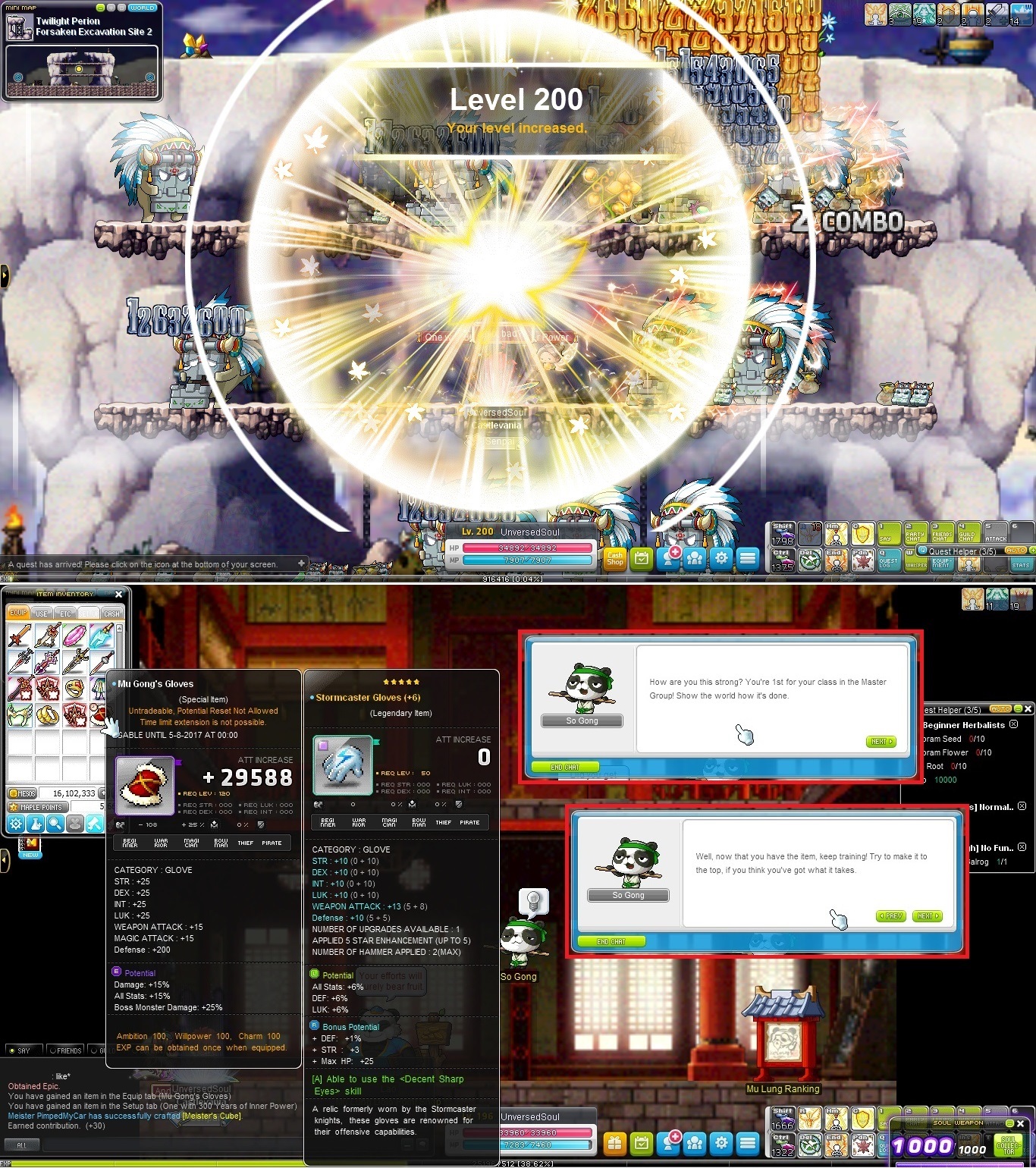 The True Knight of Light! 31st. 7762 total levels. The Unversed part of the ign came from Kingdom Hearts Birth By Sleep, something that I was playing at the time, and Soul is pretty much the name of some of Mihile's skills. Soul Shield, Soul Blade, Soul Devotion, Soul Driver, Soul Link, Soul Asylum, Roiling Soul, and if I'm not mistaken, the little spirit summon used to be called Soul too. Mihile has a damn lot of soul, dood.
The range of Radiant Cross was amazing, dood. I could just stay on the middle platform of Forsaken Excavation Site 2 and hit the mobs at the bottom, I made a training video about it. The installed cross that becomes available after adding a point into Radiant Cross - Spread is pretty good for bosses I guess. Radiant Cross - Spread might not be that good if you're already killing stuff in 1 or 2 hits, but it can be fun to use along with Soul Driver and Trinity Attack. I think a good place to have fun with it would be at Monster Park since those mobs have a lot of HP, you'll be doing a lot of lines of damage (although not very high) with installed cross + Soul Driver or Trinity Attack.
About the skill Four-Point Assault, they doubled the number of attacks since the last time I remembered the skill, now it hits 8 times. So shouldn't it be called Eight-Point Assault? I don't know. The animation is still the same. Maybe each sword now hits twice.
I never got to activate Soul Shield that often, it's just really hard for me to time it properly, it's like they don't give you enough activation time for the monsters to hit you. I dunno, it's just something I never got to experience.
I also placed first place for this class in Mu Lung Dojo and got these gloves. I've always wanted to achieve this just once before I leave this game, and I've done it. And uhh, yeah, the Stormcaster Gloves is what I use for all of my characters. I'm really obsessed with critical rate, dood.
Overall, Mihile was a great class. I can now say that I've gotten all of the Cygnus Knights to level 200. Welcome home, o glorious True Knight of Light. No one left behind, dood!

In other news, I finally finished the story mode of Xenoblade Chronicles X, about 247 hours of playtime. The reward at the end is totally worth it, dood. A really powerful Ares 90 Skell, and I guess Elma's True Form. It feels satisfying to finally be able to complete those Squad Tasks very easily now with Ares 90. It makes up for the horrible 1-10 damage per lines I did with a gun at the start of the game, look at me now, doing 1,000,000+ damage (I'll make a second post in this story with screenshots of the game). I also got to meet an angel named Hope Alanzi, she helps the citizens of NLA with their problems. Yep, truly an angel (and a good-looking one too). The game is not over yet, I still need to explore the rest of Planet Mira and complete all of these achievements. 426/749 achievements so far, dood.
http://i.imgur.com/X7RvV4v.jpg
playing MapleStory Nintendo XenobladeChroniclesX

Congratulations! Celebrate with a huge bag of gummy bears!

Congrats!
I like the fact that you somehow manage to get to level 200 even with the weirdest classes nobody cares about.

40th. I know, I lied! The last one wasn't the last 200 screenshot! I so sorry, dood. Heh, the ign is very fitting for this screenshot right here. I took my time with Beast Tamer since I already did the thing with Legion thing. It's an okay class. I t