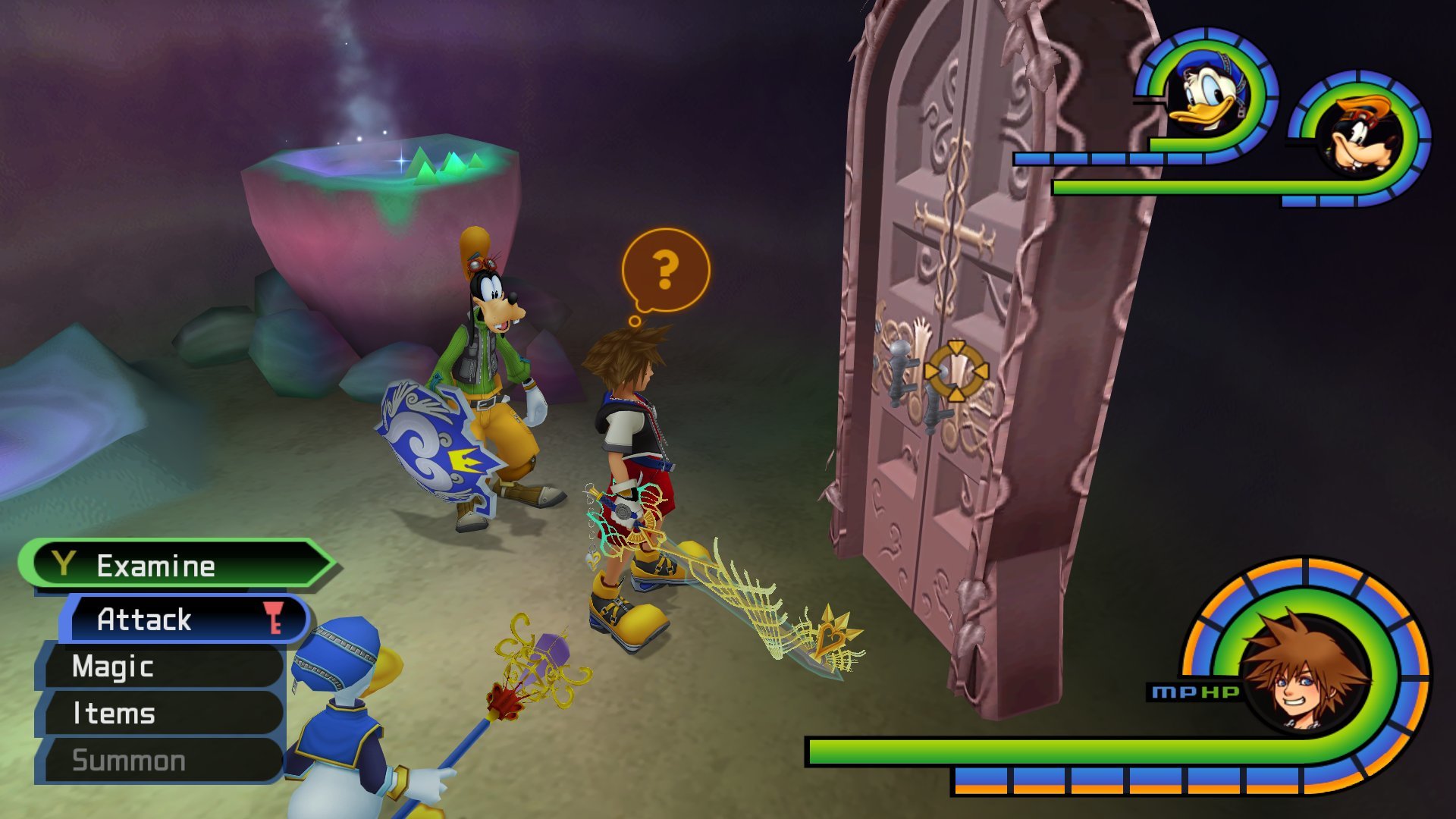 I chose Normal difficulty (it's actually called Final Mix difficulty) and I chose Staff and gave up on Shield in the beginning of the game. You know, that part where you have to choose between Sword, Staff, and Shield? I chose Staff because I thought the extra MP would be useful at the end of the game. Of course it was, but I didn't know how extremely late Sora would get the more useful abilities to make the game easier while progressing through the story. It was after level 90 when Sora could learn Combo Pluses. This made dealing with some of the bosses extremely difficult even on a normal difficulty. Sora was able to learn Air Combo Pluses, but having to jump and attack is more annoying than you would think, he just doesn't stay afloat long enough to complete the string of attacks. It also depends on the length of the Keyblade if it would hit the bosses to continue the combo. He does learn Combo Master in the mid 50s, I think. I remember dying multiple times to Ursula, Jafar, and Maleficent. Jafar-Genie was a joke though, all you have to do is attack the lamp. It's one of those weird situations where the first part of the boss fight is harder than the second part. 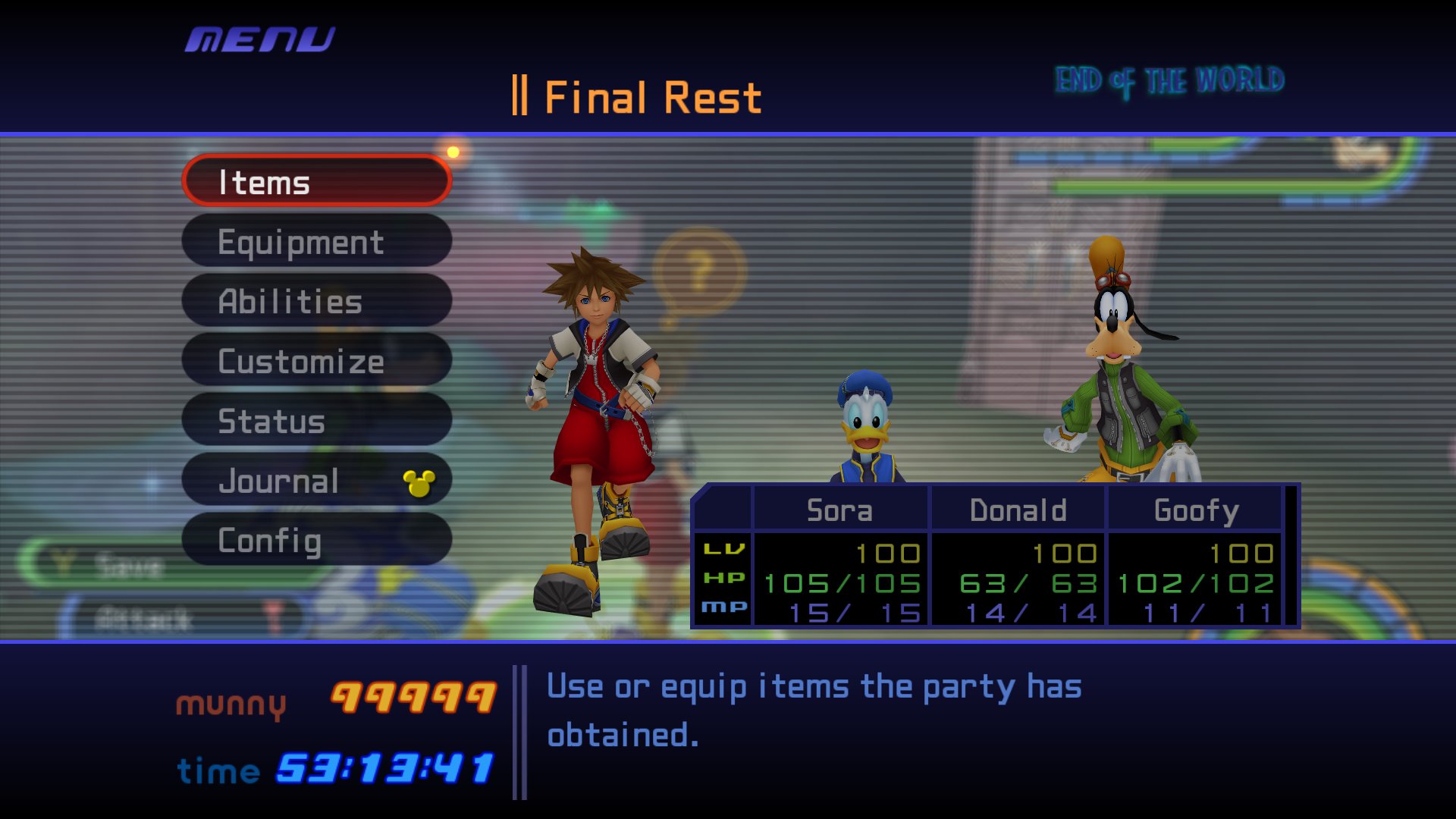 As you can see, everyone is level 100, maxed Munny (there's no reason to), and completed the Journal (King Mickey's mark).
I grinded at the Gizmo Shop at Traverse Town. I started at level 70 and stayed there until level 100. It didn't take too long, about 3-5 minutes for one level with a total of 70% EXP accessories equipped on Goofy.

In the end:
Sora is equipped with Ultima Weapon and three Crystal Crowns (HP +6, MP +1, AP +3, STR +2, DEF +2 each).
Donald has Save the Queen, Cosmic Arts, and Master Earring.
Goofy is rocking with Save the King and four Crystal Crowns because Goofy is the best.
I could get some Crystal Crowns for Donald, but oh well.

I was able to defeat all the secret bosses; Kurt Zisa, Phantom, and ?(Nobody) with 71 STR and 58 DEF. I also defeated Sephiroth for the first time ever. I don't think I've ever defeated him on the original PS2 version. When Sora and the gang leaves Olympus Coliseum, a cutscene with Cloud and Sephiroth plays. It shows the two having an epic battle. I've never seen that before. I'm not much of a Final Fantasy fan, but I'm sure the fans would've loved this cutscene.

There are some changes made to Final Mix.
New enemies, some older enemies have been recolored.
New accessories.
Some materials have been renamed, not sure if there's new materials.
A couple new weapons.

My only complain was the camera, it felt so zoomed in. It was also hard to control it, but you get used to it.

I guess I'm playing Re:Chain of Memories next. Not looking forward to it. Friggin' cards? Like, damn.