So I finished Shining Resonance Refrain on both modes, AND ALL I GET IS A STAR ON MY SAVE FILES! Totally best reward ever. Can't get enough of those stars. I rate it a 75/100. It's just the typical evil-dragon-being-resurrected-to-destroy-the-whole-world kind of story, like every Fire Emblem ever. I guess I'll type up a review and thoughts about this game.

Story:
The story is okay for what it is. I don't know, it's just there. It's not even that great.

The characters:
Yuma Ilvern, the main character, the boy that can transform into a dragon. Some of his Force abilities gives his sword an elemental charge. There's Water, Fire, Wind, and Holy. I guess he's like a mixture of MapleStory's Hero and Paladin classes. I didn't try it yet, but there's a Tuning for his weapon that gives it a lightning element effect, it reminds me of dual charge Paladin back then.
Sonia Blanche, she's the tank character and princess of Astoria. Using certain Aspects and a certain Tuning can turn Sonia into an evasion tank. She also eats a lot. Kind of a plain character.
Kirika Towa Alma, the healer and bow user. She's a Diva Magica, something about being a servant to the world dragons or something. Basically, she sings. She's also obsessive about dragons and always refers to the Shining Dragon as His Radiance. She has a bond trait called Dragon Geek. She hates carrots.
Rinna Mayfield, best mage ever. She can be naughty and can get drunk off juice. With a certain Force and Aspect setup, she can spam Force attacks with instant cast time, this can pretty much make her broken. She's got a damn cute voice actress too.
Agnum Bulletheart, the hot guy and rockstar. Has fire magic and some other nonsense with his guitar-looking weapon. Didn't use him much. A great chef and map maker.
Marion le Sheila, the ranged shooter. Her story is very tragic, being locked up in Gaelritz prison while experiments were being tested on her, like a puppet. She lost her brother Ette. Did you see it? Marion+Ette, marionette, like a puppet? Yeah, that's a thing. Anyway, she has fire power and explosions and stuff. I don't know.
Lestin Sierra Alma, the ice man. With a certain Tuning and Aspects, he can get up to 90% critical rate, which is something I absolutely like. His attacks feel weird and slow, so I didn't use him much, but only for that one time when Agnum had this great idea to leave the party to distract enemy soldiers so that the rest of the party can sneak into the enemy base. More about that later.
Excella Noa Aura, the dragon princess. I don't see what's so great about her, but heard she was popular in Japan. She seeks the world dragons power to extend her father's life, but... I didn't use her much yet. She's flat on the chest too.
Jinas Aion, the dragon slaying swordmaster. He's pretty damn cool, teleports when he attacks. Even after starting on Refrain mode, I didn't use Jinas that much. Has a tragic past.

Dating:
Yuma can date characters in this game and can receive a special ending after the credits roll if Yuma fully bonded with that character. I went with Sonia on Original mode, didn't bother with anyone in Refrain mode, I'll just do it later. Why I chose Sonia: because pointy ears are a turn off and Marion is too young. I actually would go with Rinna because she seems like my type, but you know, those ears.

Grinding and Farming:
There's some important stuff you need in order to farm efficiently. You need Steal Attack, God Hand and Drop Up aspects for your main party, and Image Training and Tune Up aspects for your benched characters. Aspects are like augmentations you can equip on weapons to get special stats or effects and stuff. You can talk to this NPC named Rapple to create Aspects, but certain Aspects won't become available until you complete some of Rapple's quests, progress through the story, or find materials from monsters. I think around Opus 4 is when you can get this setup and grind efficiently.
For grinding levels early, you'll want to find at least one Egg Hunt Sigil from Egg monsters. Once you have Steal Attack, God Hand and Drop Up equipped, talk to Alfriede and use the Egg Hunt Sigil in one of the Grimoires. Master Egg and Ex Egg monsters will reward you with high experience points, and Sigil Egg monsters can drop another Egg Hunt Sigil. Now, the reason why you want Steal Attack and God Hand Aspects is because you can effectively double your farming for items and materials and stuff, even Sigils. Steal an Egg Hunt Sigil and get another from killing an Egg monster, you'll be able to endlessly grind for Egg Hunt Sigils and use them to grind for experience points this way, until post game. The Grimoires also reward you with special Aspects that you can get while grinding.
So the reason for the Image Training and Tune Up Aspects, you'll want to put these on Agnum and Lestin as soon as possible. You'll know why in Opus 7, they leave the party. Oh man, when I failed it the first time, I was so damn angry, I wanted to give up/ragequit. But after grinding for a while and getting these two to a high level, and with a certain Tuning and Aspect build, I was able to completely destroy everything. It was the most satisfying feeling for this one point in the game. Totally worth it.

Tunings:
What are Tunings? It's like changing the character's weapon to give it special effects and stuff. As soon as you get the default weapon's tuning to level 30, you'll unlock 3 more tunings. Everyone agrees that the Concerto tuning is the way to go for end game and stuff. The thing about the Concerto tuning is that, for each level, it adds an extra value for Aspects attached to the weapon. So at level 30, it's an extra 30 value to whatever Aspects on the weapon.
Let's take Lestin for example: Concerto tuning equipped with Strike (10% crit) and High Strike (20% crit) Aspects gives him 90% critical rate. (10+30) + (20+30) = 90
And now Sonia's evasion build: Concerto tuning with Butterfly-Bee (20% evasion) and Ninja Step (20% evasion) Aspects gives her 100% evasion which is what makes her an evasion tank. (20+30) + (20+30) = 100
There's all kinds of weird builds that can break the game this way.

Bond Diagram:
I don't get it and never bothered with it in Refrain mode. It's just something that gives special effects during battles. It really is too confusing to figure out. 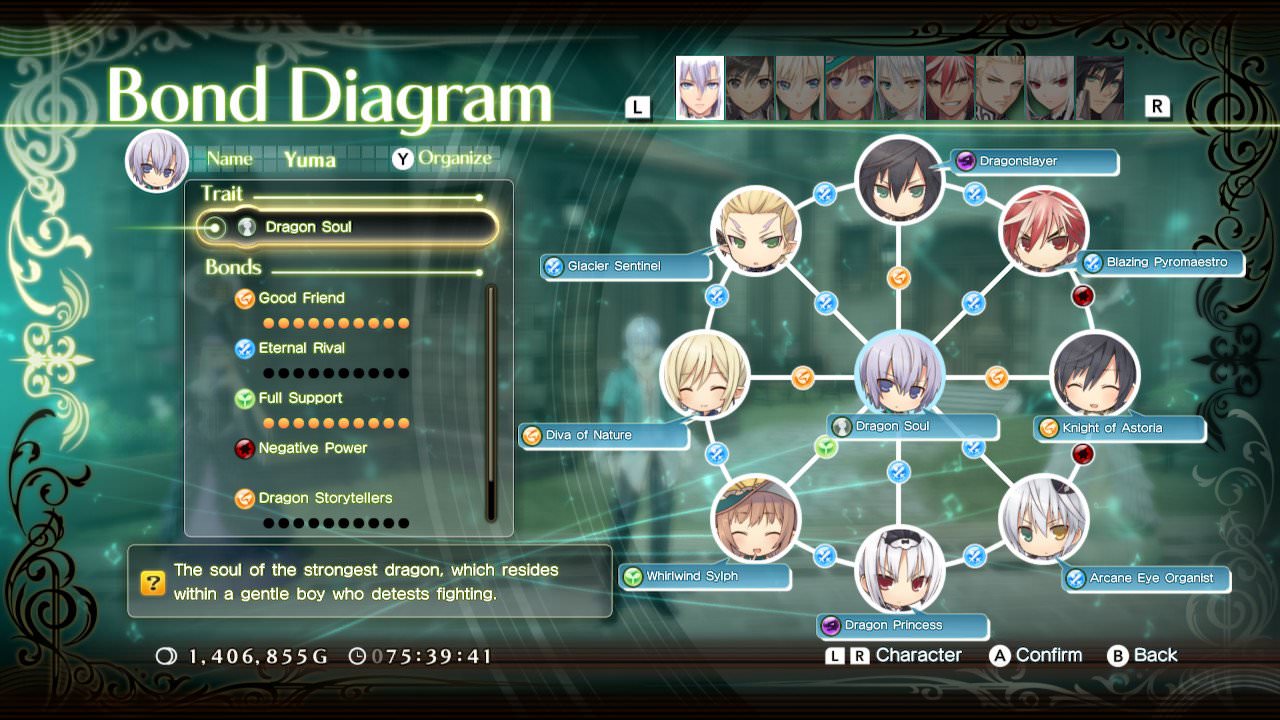 Other stuff:
There are certain monsters that are completely immune to physical attacks, so it's always good to have Rinna or someone else with a magic type Force on your active party. Yuma does have at least 2 magic Forces.
Quests are repeatable.
The level cap seems to be 200, I'm only at level 103 at the time of typing this. Realistically, you only have to be like level 90 to beat the game.

Well, that's my review of Shining Resonance Refrain. It didn't last long enough for Kingdom Hearts 3, so now I have to play another game while I wait. I did pick up Ys VIII last week, so I guess that game? I still have to complete my 3rd playthrough for Tokyo Mirage Sessions to get all the trophies, but holy frick is it hard to go back to the Wii U after experiencing the Nintendo Switch.
Should you play Original mode first? NO. It's pointless. Just go straight to Refrain mode.
0 865 2018-10-29

hey i beat it too recently fun game

I don't think they're that bad at mobbing, dood.

Tuesday tunes, dood. Ritual of the Night is so close, hopefully no more delays.

I didn't know Dark Omen can have its cooldown reduced, dood.